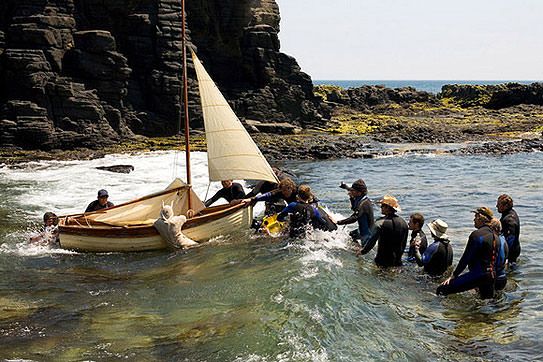 When his son Max was cast as the lead actor in Spike Jonze’s adaptation of the Maurice Sendak classic Where the Wild Things Are, Shawn Records asked the director’s team for permission to shoot on set. After they’d reviewed his work, Shawn was invited to be a guest photographer for the production and given free reign to photograph whatever, whenever. Not content to limit himself to behind-the-scenes pictures, Records challenged himself to make pictures that were both about the enormous and complex production, and also pictures that referenced this circus-like absurdity with his parental fears about letting his son take on a role that would lead to a public life, something beyond any parent’s control.

The resulting photographs have made it out into the world in a variety of locations. For Records however, his favorite edit, his personal edit, is the “manifestation of his anxieties” that makes up Owner of This World, an artist’s book published with Publication Studio, an experimental publisher specializing in art and literature.